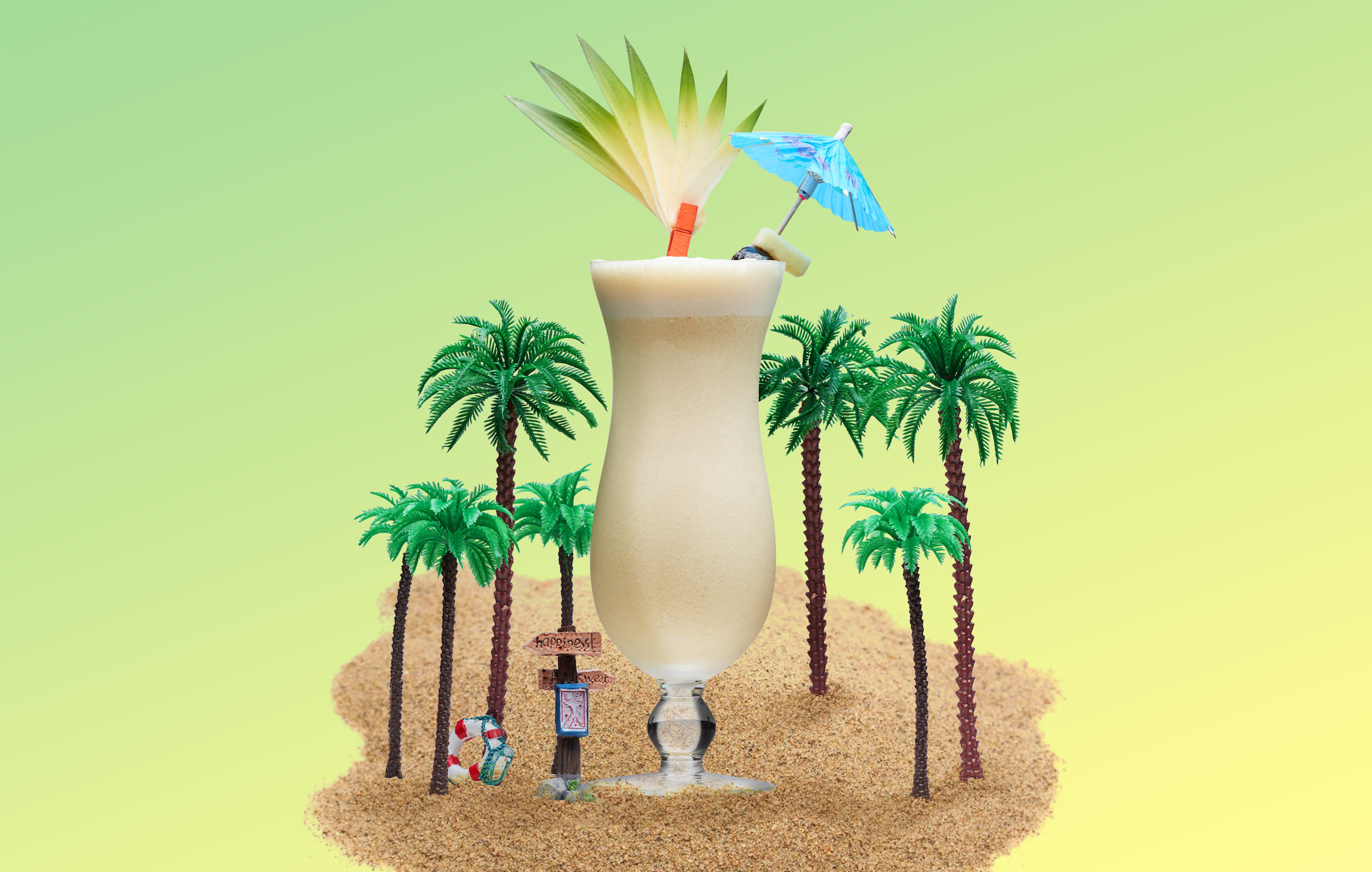 Escape to paradise. By Seamus Harris.

Nothing beats an escape into the familiar. Rupert Holmes understood. His cheesy seventies hit Escape, better known as The Pina Colada Song, tells of a dulled love reignited, as two bored lovers, each mulling infidelity, reconnect through the newspaper personals. Aww, sweet. So the mundane was meant to be, and true love lay hidden in plain sight – or beneath the froth on a round of tropical drinks. The lesson here is never let familiarity breed contempt, and it applies to the Pina Colada too. Hipster mixologists can scoff, but those who argue against pineapple, coconut, ice and rum do so at their peril. This is a tacky eighties drink that still deserves your love.

The national drink of Puerto Rico, favourite port of call for the amiably bloated human cargo of the Caribbean cruise industry, the Pina Colada’s origins are almost as sticky as the cocktail itself. Three mid-20th-century bartenders claimed invention. Puerto Ricans naturally credit the sole local contender, Ramon “Monchito” Marrero Perez. Monchito said he spent months perfecting the Pina Colada before launching it on 15 August 1952 at the Beachcomber Bar of the Caribe Hilton in San Juan. The inspiration was iconic local brand Coco Lopez, then fresh on the market as the world’s first “cream of coconut” — sweetened coconut cream.

A couple of Spaniards made their own claims. Ricardo Garcia, also behind the bar at the Caribe Hilton in the 1950s, put it all down to providence. A strike cut the supply of fresh coconuts used as serving vessels for the hotel’s signature drink of rum and coconut, and the substitution of hollowed out pineapples birthed the Pina Colada. Finally, roving bartender and cocktail book author Don Ramon Portas Mingot boasted of inventing the drink in 1963 while working at Barrachina, a restaurant in Old San Juan. Today both the Caribe Hilton and Barrachina promote the drink as theirs, with a plaque on the exterior wall of the latter establishment taking the propaganda war to passing pedestrians.

In fact though, like Puerto Rico’s other iconic libation, Bacardi rum, the Pina Colada is a Cuban emigre. The term Pina Colada first appeared at the non-Puerto Rican end of the Greater Antilles. Counter-intuitively, the name has nothing to do with coconuts. “Colada” means strained in Spanish, while “Pina” is pineapple. The drink originated as a blend of pulverised pineapple and sugar, with the solids strained out, and optional additions of rum and lime. The American boozehounds who tore up Havana during Prohibition mentioned it as a local favourite. Coconut also entered the mix in Cuba, but only after Prohibition did this variant become standard.

So Puerto Rico did not invent the Pina Colada, but probably perfected the modern form, and certainly popularised it. But while known all around the world, the Pina Colada has ironically become a flashy badge of unworldliness. Petty criminal and wannabe yuppie Del Boy Trotter, of UK sitcom Only Fools and Horses, exemplifies the type. More comfortable in scruffy local pubs than temples of tropical libations, his Pina Colada habit only highlights his gaucheness. As always though, Del Boy’s heart is in the right place. It is just all about execution, so caveat emptor. Made well, the Pina Colada becomes a magnificent application of rum and tropical produce. A good Pina Colada is hard to find, but should you wash up in a bar that makes the effort, then wear the Pina Colada badge with pride. In that spirit, July 10 is National Pina Colada day in the United States, so why not declare it International Pina Colada Day and get blending?

From Cuba to Puerto Rica, then the world

1922The term “pina colada” makes its first appearance in writing, at least in English. The December issue of Travel, a US magazine, writes: “Havana has learned the art of mixed drinks from her northern neighbour, and has contributed some original creations. In Cuba the ingredients of every known drink are to be had – even those of the South Seas. At the end of almost every bar is a heap of ripe pineapples and green coconuts… best of all is a ‘pina colada’, the juice of a perfectly ripe pineapple – a delicious drink in itself – rapidly shaken up with ice, sugar, lime and Bacardi rum in delicate proportions. What could be more luscious, more mellow and more fragrant?”

1949 Ramon Lopez-Irizarry, a Puerto Rican professor of agriculture, starts to develop Coco Lopez, though only several years later is the product fully patented and commercialised. The first “cream of coconut”, Coco Lopez used the addition of sugar and emulsifiers to simplify the manufacture of coconut cream, and was commissioned as part of a government rural development project. More convenient than coconut cream for use in confectionary and deserts, Coco Lopez would make Lopez-Irizarry very wealthy.

1950 Coconut is first mentioned in connection to the Pina Colada, which is still considered a Cuban drink. In a piece called “At the Bar” (published April 16) The New York Times writes: “Drinks in the West Indies range from Martinique’s famous rum punch to Cuba’s pina colada (rum, pineapple and coconut milk). Key West has a variety of lime swizzles and punches, and Grenadians use nutmeg in their rum drinks. Cubans and Puerto Ricans make a variety of tasty and exotic fruit beverages. These include guanabana (soursop juice), fruta bomba (papaya), watermelon juice, muskmelon juice and a drink of almond blended with banana juice.”

1952 According to Puerto Rican lore, “Monchito” Perez blends the world’s first Pina Colada at the Caribe Hilton in San Juan. The drink in fact had been around for a while, but the Coco Lopez form that spread from Puerto Rico and around the globe must date from this time or later, for the simple reason that Coco Lopez did not exist previously. Oddly though, the Pina Colada fails to appear in Puerto Rican tourism publications or travel articles in the 1950s, and nor is it mentioned in contemporary promotional material from the Caribe Hilton. This was the era when media-darling Joe Scialom was running the bars at the Caribe Hilton, and he never spoke of the Pina Colada, despite talking up many other creations. This casts doubt on the legend of Monchito Perez.

1978Puerto Rico officially declares the Pina Colada its national drink. While it may be a myth that the drink was invented locally and stormed to popularity in the 1950s, it had certainly captured Puerto Rican imaginations by the 1970s.

2010sThe Pina Colada sees a revival in its fortunes as craft bartenders start to afford it some respect. New York tiki bar PKNY declares the Pina Colada the standard by which they measure all their blender drinks. Bacardi sponsors a Pina Colada competition at Tales of the Cocktail in 2011. The winning entry is No Passport Required (from Chicago bartender Debbi Peek), a spiced and caramelised spin on the drink that contains smoked rum, roasted pineapple puree, brown sugar and a dash of ginger. But the Pina Colada may be best when kept pure.

Bar Trigona launches a hive-adopting scheme to save the bees

The Daily Tot opens in Hong Kong, despite the city’s current pandemic restrictions

Do you have what it takes to be Havana Club Bar Entrepreneur of the Year?

Bartender, stop! Before you reach for the M&M-packed miniature parrot, read this

Be first to check out our latest Pontiac-rocking Playlist

Native, Atlas and Sober Company win at the Spirited Awards 2020

World’s 50 Best Bars to be announced online in November