At Arch, aperitivo culture, experimentation and cocktails manifest as a curve connecting two pillars: Italy and China. By Elysia Bagley.

Last month, Vincenzo Pagliara left his position as bar manager of The Zuk Bar at Sukhothai Shanghai so he could head back to Italy to open a new venue. But before he fully signed on for the project, he wasn’t 100 per cent sure about bidding farewell to Shanghai – a feeling he expressed to fellow industry friend Daniel An. So, Daniel, the Shanghai scene veteran and proprietor of Taste Buds group bars, proposed an alternative. He was opening a new bar, too – why not do something together?

“Daniel told me to come to an address – which is now Arch – and he said ‘this is our new place.’ I didn’t even know what he was saying at first, and he was like, ‘So, do you like the space? This is going to be ours.’” Decision time for Vincenzo… to leave, or not to leave?

“For a couple of days, I thought really hard about leaving Shanghai and going back to Italy full time,” he says. “Honestly, I was worried about leaving – Shanghai has given me a lot. So I talked with my partners back in Italy, got some quotes, and we decided I could do both. I told Daniel let’s go for it – just don’t think about it, let’s make it happen!

And so, located in Shanghai’s Jing’an district and set to open in early May – here’s the exclusive on Arch.

The venue’s name itself is conceptual. An arch is not only a curved structure that supports what it holds above it; it’s a structure that curves to connect two points. In this case, those two points are Italy and China; Vincenzo and Daniel. So that’s the beginning: each is a pillar and there will be drinks spotlighting both Chinese and Italian elements and flavours.

But as Vincenzo explains, while building an arch, the pillars require support from all sides, up until the very last stone is set in the centre to complete the final structure. And that’s the soul of Arch – it’s the point where Italy and China really come together, and stop being separate pieces. And so, from cocktails to noodles, that space is where the crossovers will rest. Everything will be executed with this arch concept at the core, and that will happen across three parts: aperitivo bar, laboratory and cocktail bar.

At the front of the venue is the dedicated aperitivo bar; a big focus of the venue. The menu will reflect classic Italian culture in character, with classic aperitivo cocktails, but there’s a flip side to it: adaptations designed to make the flavours more understandable for a market that’s still being introduced to the idea of aperitivo.

“Daniel and I both come from a hospitality background, which is super focused on details and guest satisfaction,” says Vincenzo. “We understand we are in China, and aperitivo culture isn’t here yet, so the whole concept of the bar is to show people what we want to do, but also give them something that they expect so we can better connect them with the concept

Basically, they aren’t opening Arch with the intent of force-feeding China a practice that many consumers don’t know it or aren’t quite ready for – they want people to slowly fall in love with the true culture of aperitivo. “We want to familiarise people with the Italian way of drinking, but at the same time connect Italy with China,” he says. “With the ‘easier’ aperitivo menu offered on the side of the ‘authentic’ one, it’s like taking guests by the hand and guiding them slowly into the exploration of this new culture.”

The adapted menu twists aperitivo in a way that is more approachable to local palates, with more local ingredients and flavours. One example he gives is a Milano Torino, a classic made with Campari and sweet vermouth. The Arch twist oxidises the drink and infuses it with passionfruit, kefir lime, lemon leaves and mango vinegar. “We dress up this rough, bitter aperitivo with a nice Balenciaga fashion gown, and offer it to the guests like this,” he explains. “They may not know, but they’re still having a drink with an aperitivo structure – it’s slightly bitter, fruity but not sweet, and astringent, which opens up your appetite.”

At The Zuk Bar, Vincenzo’s affinity and knowledge when it comes to experimentation and lab techniques had a presence in every drink, and that will carry over to Arch in a big way. Set in an open glass room within the venue, the lab space will have rotary evaporators, vacuum machines, sous vide machines, Thermomix, you name it, and all for the guests to see.

“In the lab, we’ll focus more on discovering flavours,” Vincenzo explains. “We’ll analyse ingredients and try to utilise them in cocktails from different point of view.” The team will also use the lab as a place to play with different perceptions of flavours and bring more staff members into the process. “For instance, in China, the staff might pair truffle with completely different flavours than we would in Italy, as it’s not really something in their culture,” explains Vincenzo. “We want the staff to give us out-of-the-box ideas we can work on.”

The cocktail bar at the back of the venue – aka the long bar – is where the results of the lab come to life, and where the two pillars connected by an arch concept comes into play in a more tangible way.

There’s one pillar of drinks which reflects Italian elements, and one which reflects Chinese –  the Chinese side won’t necessarily be from Daniel, nor the Italian just from Vincenzo. That’s kind of the point. “It’s all about exchanging and exploring what two different cultures offer, in terms of ingredients and elements,” says Vincenzo. And then there’s the arch of the menu, where East and West will come together in some new-fangled ways.

And there’s food, too – mostly in the form something the two countries share. Noodles. And we say noodles because it will be homemade pasta, but available two ways: the Italian way – al dente – or the Chinese way – cooked softer – which they’ll call “mian”. Now, Italians, don’t freak out… it really makes sense.

“Even with this, we’re focused on the guests,” says Vincenzo. “People here are not used to the way we cook pasta in Italy. Yes, the noodles are very similar, but the way you cook them is different, and while guests may like the condiments, they don’t always like the texture.” So, guests can choose whether they want al dente or mian style. “We’re not compromising quality ingredients or flavours, we’re just compromising with something small, the cooking time.” Ultimately, who is Arch trying to please – staunch Italian chefs, or guests in Shanghai? If the people want soft noodles, give them soft noodles.

To start, if there’s one thing that both bartenders see in the other, it’s humility – and that’s something they both seriously value. Case in in point: when we ask Daniel why he wanted to work with Vincenzo, he’s swift with the answer: “Because I think he’s better than me, that’s why!”

Adding a fourth venue, he knew he wanted partner for the new project, but it needed to be the right fit. “Vincenzo will bring more techniques to the bar – I’m good at Atelier’s style, not ‘lab’ style, and it’s time to teach more to my staff these things,” he says. “But he not only has good technique, he’s also very humble, and I know he’ll have a good relationship with the staff. My staff want to work with me because we’re good friends, and Vincenzo is already like a friend to them; like family. He’s not just a boss, and that’s important.”

And that’s what Vincenzo wants, too. “What I love about Daniel is he’s very humble – he’s opening a new bar and has three others, but you still seem him working the bar. When it’s is full and he sees guests come in, he gives up his table – he cares about his bar, he cares about his guests. It reflects working in hotels, which we both share. They really teach you to think and look after your guests – more than yourself, more than your ego, more than the drinks. And that’s Daniel.”

What’s more, Daniel has made it possible for Vincenzo to keep one foot in a place he really wasn’t ready to let go. And about that one foot in China, one in Italy, there’s another important part of this partnership – time management. The two are redefining the word busy. With Daniel already having three other venues to run, and Vincenzo sharing his time between Italy and Shanghai, they’ll be splitting up time at the bar 50-50. “I don’t have time to run it all myself,” says Daniel, “I can spend about half my time at Arch, so he’ll be there the other half. When he’s not here, I’ll be there.”

For both bartenders, Arch is about breaking out of comfort zones and going for something new to liven up future – even if it’s a risk. Vincenzo sees the bar as a way for both of them to expand their creativity, do their own thing, and be themselves. For him, it’s the first time he’ll be breaking off to totally do his own thing. “Stepping out and putting myself into two different collaborations is definitely more of a risk – and of course it’s a bit worrying, because nothing is sure. There’s no more stability; no more set plans. Shanghai is a very tough market, and it will be challenging.”

And while Daniel is no stranger to opening bars, Arch’s concept is unexplored territory for him, too “On the business side, I don’t want to keep doing the same thing,” he shares. “We’d just be sharing the same stuff with our customers. I want to do something more interesting for the future, and I think I need to lead the way with something new. Otherwise, people will just want me to copy Atelier in other cities. Yes, it’s easy to build this kind of business – but it’s also easy to fail. It starts easy, but after year it can all break down.”

Arch is no doubt experimental for Shanghai, and the two are well aware of it. Do they see aperitivo being successful in China?

“Doing aperitivo is going to be as challenging as it is exciting, because it’s completely new for local guests; helping them embrace it and start to make it part of the lifestyle,” says Vincenzo. “So the exciting thing is not the objective, but the way we are going to arrive there – seeing how things will develop and which direction things will go. It’s going to take a lot of adaption, from both sides, me and Daniel.”

If one thing is clear, neither of them fear the task – they’re both ready to throw down and give it their all. “I don’t know if it will be popular, but everything has a start,” says Daniel. “If you want to do something new, you have to try something new.”

Who’s on shift: Guest bartenders in Asia this May 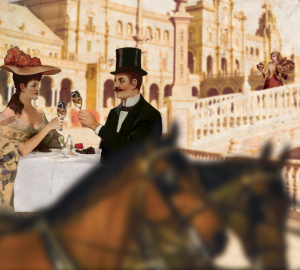 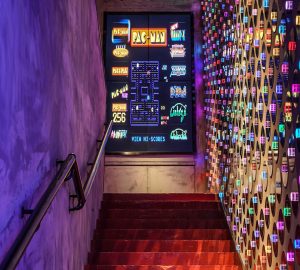 These were the new China bars we loved in 2018

Get to know: The Boulevardier and the Old Pal

Here’s what the bar industry wants left behind in 2018